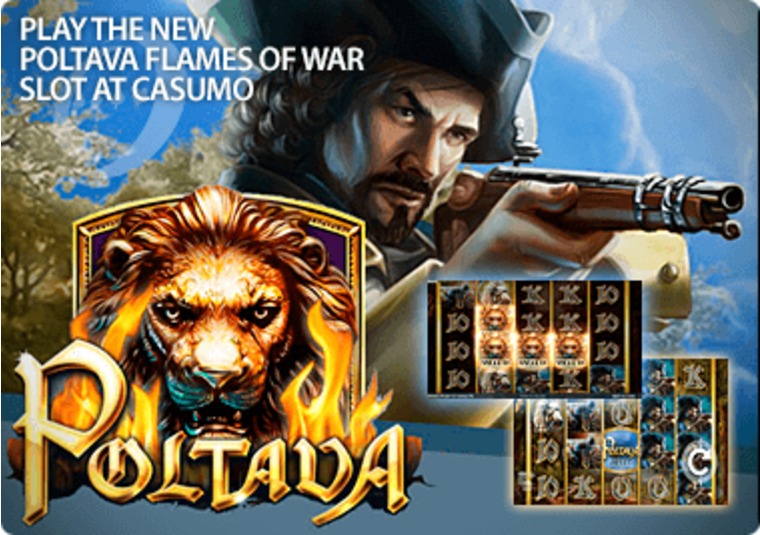 Play the new Poltava Flames of War slot at Casumo

The slot is based on an epic 18th century war in Europe, but will you get lucky by hitting a big win?

Even the name of this slot sounds epic - Poltava Flames of War. Epic is a good description all round, in fact. The events the slot is based on are epic, the slot itself is epic, and the money you can win is epic too. What more could you want? Try it today at Casumo.

The theme of Poltava Flames of War is the war that took place in the early 1700s between the Swedish army and Peter the Great. The setting is an intense and moody Ukrainian forest. Check the game out at Casumo now to see the fantastic graphics and listen to the excellent music.

The game is made by ELK Studios, and is an impressive addition to their portfolio, many of which you can play at Casumo. Try them today.

Poltava Flames of War has 5-reels, four rows, and 40 pay lines, and is full of military symbols. When you first start playing it at Casumo, you’ll begin in normal mode. If you fill a reel with the same combat symbols, however, you’ll trigger the marching reels feature. This can generate wins of up to 1,800 times your bet – try it now.

To play Poltava Flames of War you will need a Casumo account. Register for one today to get a welcome bonus worth up to £1,200.

With your account you will be able to play all of Casumo’s great games including Poltava Flames of War.