What is Pai Gow Poker in a Nutshell?

Pai Gow Poker is a relatively recent addition to the world of gambling, although its roots can be found in the enormously popular Chinese game of Pai Gow dominoes. Today, the game is played with a standard deck of cards and is a much sought after version of poker at land based and online poker rooms. Players can substantially increase their winnings by learning strategies connected to this game.

What is the Object of Pai Gow Poker?

The player needs to create two hands of cards that are higher than the dealer’s two hands, using traditional poker card rankings.

What are the Basics of Pai Gow Poker?

Pai Gow Poker is played around a special Pai Gow table that can hold up to six players; however, the game is played against the dealer and the cards dealt to the others are of no consequence to the player.

The house first appoints the dealer as the banker, although this role moves around from player to player. Nobody is obliged to accept this role, which can be passed on to the next player.

The game is played with a standard 52-card deck, with a Joker acting as a wild card in certain hands. The Joker also takes on the role of an Ace in any hand. 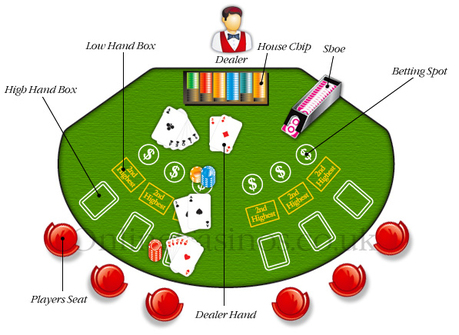 How is Pai Gow Poker Played?

How are Winnings Determined in Pai Gow Poker?

Both the player’s hands need to beat the dealer’s hands of cards. If either of the hands of cards matches, these are known as copies and the banker wins automatically. No money is paid out on a tie – ie. when one of the player’s hands beats the dealer’s but not the other. Winning hands are paid out even money on their bets, however the house usually takes a 5% commission on each winning bet.