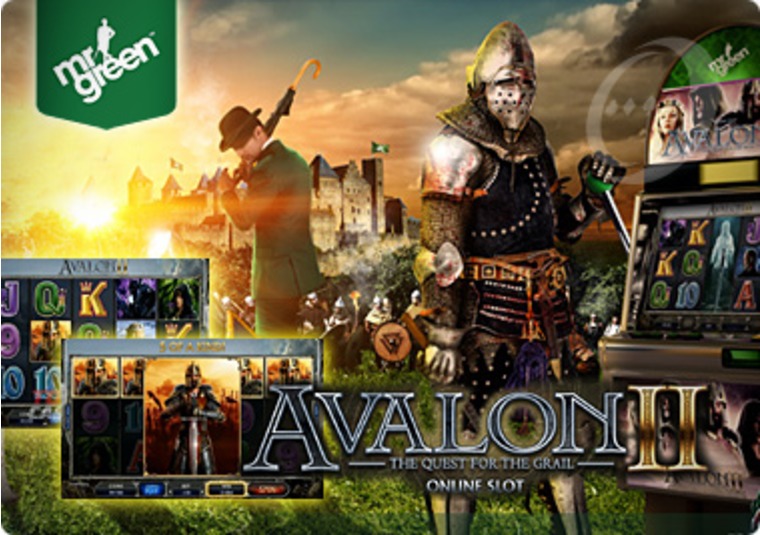 Search Avalon for the Holy Grail in Microgaming's new release, Avalon II that is rolling at Mr Green!

As a sequel to the successful Avalon slot, Avalon II has recently been released by Microgaming and may be enjoyed at Mr Green. The original proved to be a great success and the next game has been eagerly awaited by many players. This is it! Avalon II may now be found at Mr Green!

The Avalon II slot boasts fantastic 3D animations and features the familiar characters of Merlin, King Arthur and Guinevere. This video slot offers 5 reels and 243 ways to win and a variety of elements to increase the player's sense of enjoyment at the game. Look out for hot features such as Rolling Reels and Trailing Wilds in addition to benefits like scatters, multipliers and bonus games! There are eight bonus games involved in this adventure and the new video slot presents the opportunity for lucky players to win big!

If you are lucky enough to spot Merlin you may gain a cash prize or alternatively a multiplier that may increase the size of your winnings! Avalon II is adorned with great music and attractive sound effects and offers its players some great action. What are you waiting for? This new video slot game is just one of the offerings in a fantastic selection of online gaming entertainment that is available at Mr Green. A fun aspect of playing at Mr Green is that new games are added to this site on a regular basis.

Go back in time to the legendary period of King Arthur and the Knights of the Round Table and try your luck at Avalon II! You can play this cool video slot at Mr Green today!