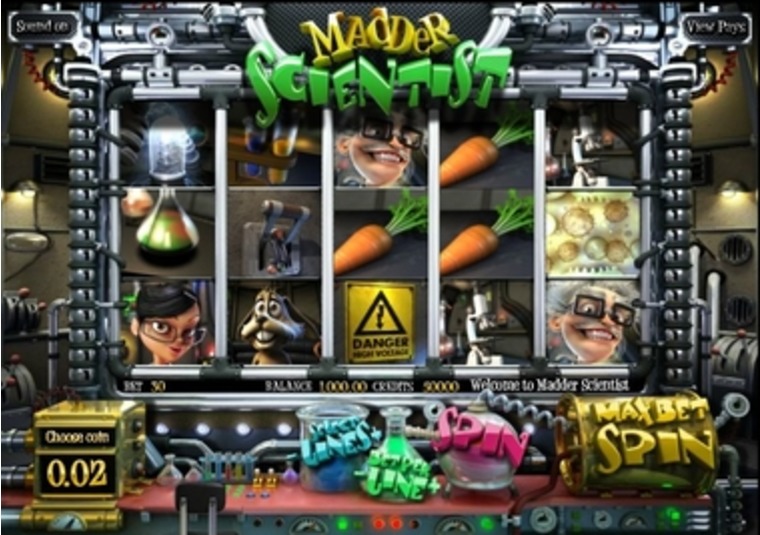 The Mr Green Casino has introduced a new fun slot game by the name of Madder Scientist that follows in the footsteps of the slot Mad Scientist.

After the success of the Betsoft slot Mad Scientist, an additional game featuring the same crazy character has been released. This could be explained as a better version of the Mad Scientist game. The Mr Green Casino is featuring this new 3D slot, Madder Scientist.

Madder Scientist with its 5 reels and 30 pay lines hosts various special features for the entertainment of its players. Check out the mad scientist's lab and you could enjoy features such as scatter, free spin, re-spins and a bonus round. One feature that is worth a particular mention is a wild switch possibility that that is enabled following the appearance of three switch symbols. This feature transforms one reel into a wild for the duration of 5 spins. An additional interesting feature is known as click me and this is enabled in the event that 3 beaker symbols show on the reels 1, 3 and 5. This aspect allows players to click on selected symbols. The act of clicking shows prizes and this may be continued until the click produces a collect sign.

All in all, Madder Scientist is an amusing, bright and colourful game that presents the chance to win hot prizes!

If you have not yet signed up at the Mr Green Casino, you may take advantage of a 100% match bonus. In addition, at the time of writing, this attractive online gaming site is also offering 10 free spins at the game Gonzo's Quest.

Take a look at new slot pursuit Madder Scientist at the Mr Green Casino and get ready for a fun spin!