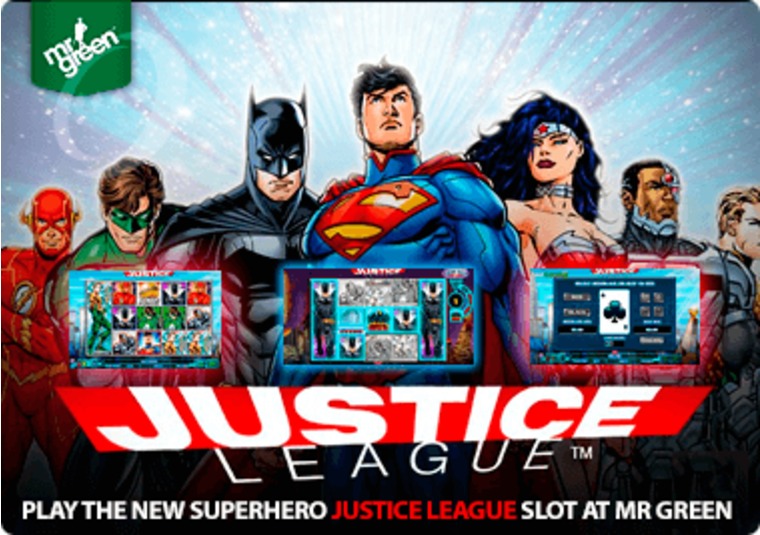 Justice League is an action-packed and feature-rich slot with all your favourite superheroes.

You’ll know all the superheroes from Justice League – now it’s time to play the new slot. It’s one of Mr Green’s newest games, and it’s full of thrills and excitement. Try the new game today.

Justice League is made by NextGen Gaming, one of Mr Green’s game providers. It has five reels and 25 pay lines plus excellent graphics. You can play on desktop or mobile – try it now.

It’s based on the Justice League comic book characters - Superman, Batman, Wonder Woman, Green Lantern, Aquaman, The Flash, and Cyborg. In fact, the symbols in the game are the characters from Justice League. Find out which ones will land on your reels by trying it now at Mr Green.

Superman is the highest value, of course. As you would expect from a Mr Green game, it’s also full of bonus features – check them out today. They include Team Rescue, Super Hero Power-Up, and Attack on Metropolis. The latter is triggered when three Daily Planet bonus symbols appear.

Justice League is a game that has lots going on, making it really fun and exciting to play. It’s not complicated though. Play it now - you will pick it up in minutes.

Mr Green has a fantastic feature where you can try its games, including Justice League, for free and without an account. If you want to play for real money, however, you will have to sign up. The welcome bonus available if you register today includes a 100 percent deposit match-up on your first deposit, up to £100. You can also get bonus spins, depending on how much you deposit and play.

Your account will give you access to all the great Mr Green games, including Justice League – try them today.