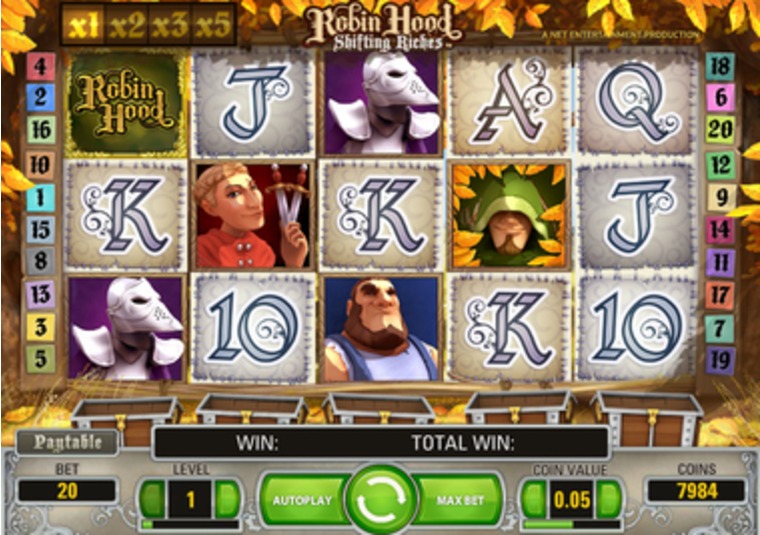 Check out the action at the fantastic 3D video slot Robin Hood at the Mr Green online site!

The Robin Hood slot was developed by Net Entertainment and this thrilling video slot game was released in September 2011. Inthis pursuit, players may participate in the spinning fun as Robin and his band of merry men go about their tasks of taking money from the rich in order to distribute among the poor. Obviously, the casino player's aim is to earn money bags of his or her own and here the gamer may enjoy the adventure at the entertainment that is based on the traditional story of Robin Hood.

With entertaining graphics, the Robin Hood video slot presents 5 reels, 3 rows and 20 bet lines and boasts thrilling features including Money Bag and Shifting Reels. In this game the type of reel that usually appears at a slot game has been transformed into a shifting reel that moves along to the right following a win. Together with a multiplier feature, the Shifting Reels may present more chances to win and an exciting gaming experience. The money bags that can be accumulated by good old Robin Hood during the game may set off a free spins feature once four have been gathered.

Robin Hood offers its players the chance to enjoy an exciting spin together with the opportunity to earn great rewards. You too can take a virtual trip toSherwood Forestand experience the Robin Hood slot at Mr Green!

Launched in 2008, Mr Green is an attractive online gaming site that regularly adds new games to its already impressive collection. Classic games like blackjack and roulette join an exciting selection of slots at this site.

Take a look at the cool 3D video slot Robin Hood at Mr Green and have fun!