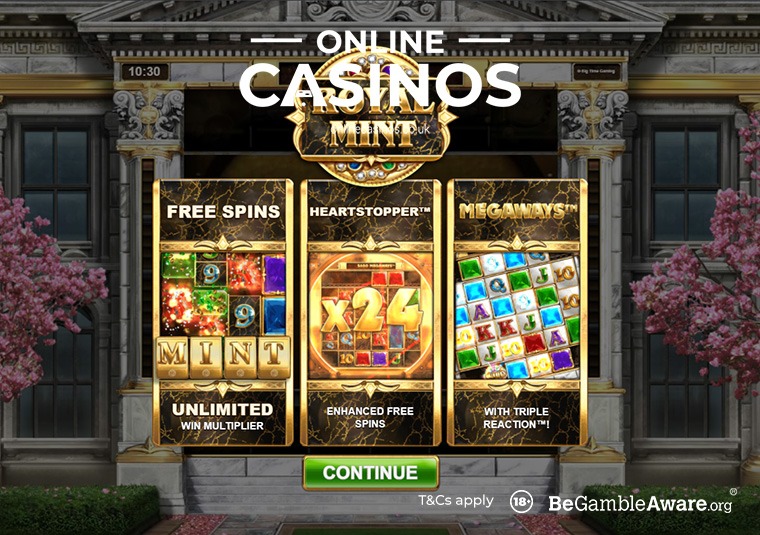 One of the finest titles by the supreme developer Big Time Gaming, Royal Mint: Megaways is a six reel slot game that has an enormous 117,649 paylines.

It’s inspired by the body responsible for minting the UK’s coins and features a very competitive payout.

We’re big fans of Royal Mint: Megaways and we’re certain you will be too.

What are the key features of Royal Mint: Megaways

We’ll tell you exactly what we think about the look and feel of Royal Mint: Megaways a little later on in this review – but first, we need to let you know all the headline features:

With gold and jewels draped across the screen, Royal Mint: Megaways has a very regal feel to it – if the Queen’s a fan of playing slots then she’d no doubt adore the look of this game.

The high-class imagery is matched by the gameplay – it’s crisp and very simple to both navigate and place your bets.

Royal Mint: Megaways’ six reels feature between two and seven symbols – the greater the number of symbols you get, the more ways you have to win. And with seven symbols on each of the reels giving you the game’s massive 117,649 paylines.

All in all, it’s an absolute breeze to play this excellent video slot.

Where can I play Royal Mint: Megaways?

We’ve played Royal Mint: Megaways at LeoVegas Casino, one of the UK’s finest gambling sites as we covered in our review.

But LeoVegas isn’t the only place you can play this great game, as you’ll see from the list of some of the top sites (including LeoVegas) that you can play Royal Mint: Megaways:

While the enormous number of paylines, high maximum bet, and ace graphics are all great features of this game, we’ll admit that the one thing we like most about the game is its very competitive RTP.

RTP stands for return to player, and it’s the way that you measure your chances of winning a casino game.

Royal Mint: Megaways has an RTP of 96.48%, meaning that £96.48 of every £100 wagered on the game is paid back to players over time – making it a pretty good investment of your money compared to many slots titles.

Our verdict of Royal Mint: Megaways

At OnlineCasinos.co.uk. we’ve had a lot of fun playing Royal Mint: Megaways – it’s one of our favourite new slots games. That’s why we’ve given the casino high scores in the key categories we use to assess every slot game we review: