What is Sic Bo in a Nutshell?

The original Chinese game of Sic Bo (meaning dice pair) is played today at casinos using three dice. Played around a custom table, Sic Bo has a loyal following of fans at both online and traditional gambling establishments and is considered a game of chance.

What is the Object of Sic Bo?

Players need to select individual numbers or a combination of all the numbers that come up on the dice after they are thrown. Players can choose from a number of betting options during the game.

What are the Betting Options in Sic Bo?

The game of Sic Bo is traditionally played around a customized table that depicts the various betting options available to players. The images on the table show the dice in the various positions that they can land on, to enable players to make their predictions.﻿ 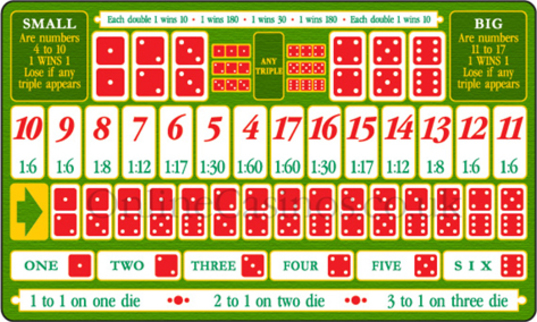 There are several betting choices available to the player:

How is Sic Bo Played Out?