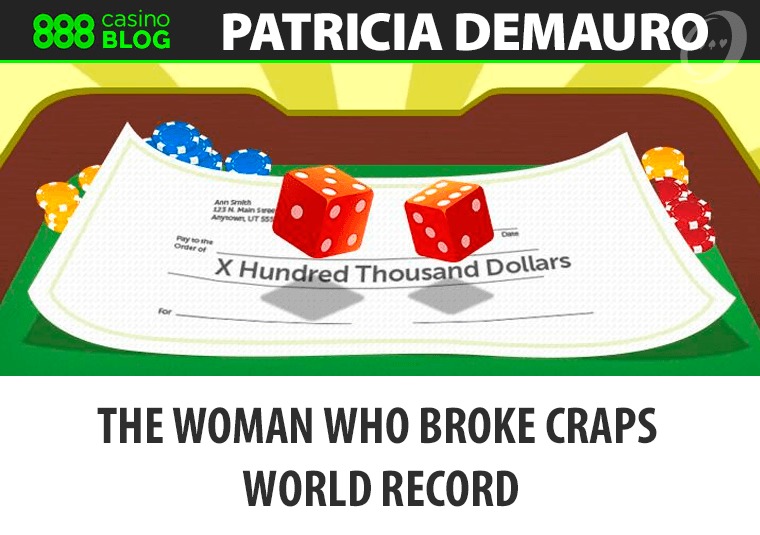 888casino explains how a grandmother broke a craps world record

Stories of impressive winning streaks demonstrate just what can happen when your luck is in while at the casino.

If you look at the statistics and history books regarding big wins at casinos, most of the names on the list are men. Experts have speculated as to why this might be the case. After all, there’s no reason why men should have any more luck than women. The general consensus, however, is that men are more likely to play and more likely to risk higher stakes. When it pays off, the rewards are higher. There’s one grandmother from New Jersey, however, who managed to buck this trend of men dominating the biggest ever win league table. 888casino recently explored her story.

It happened back in 2009 to Patricia Demauro when she was playing craps at the Borgata Hotel Casino and Spa in Atlantic City. The night for Demauro started with a $100 buy in. She spent just over four hours at the craps table and managed over 154 successful rolls.

Let that just sink in for a moment — 154 rolls. If you play craps, you’ll understand just how impressive that is. If you don’t play craps, the odds might put it in perspective. The odds of anyone achieving that sort of winning streak playing craps is one in 1.56 trillion.

In other words, it shouldn’t have happened. As you know, however, anything can happen in a casino, and it did for the lucky Demauro. She has never divulged exactly how much she won, but estimates put it in the hundreds of thousands. That’s not bad for a $100 buy in.

What makes the feat even more impressive is that Demauro was a craps novice at the time. After the event, she put it all down to beginner’s luck. That didn’t stop the casino losing what could have been millions, though, as other players at the table jumped on Demauro’s band wagon. As Demauro rolled just about every possible combination except for sevens, everyone’s luck was in.

The previous record holder of the most successive dice rolls by a craps player was held by a man known as “The Captain”. His winning streak came in 2005 with 147 dice rolls. Demauro beat that by some distance.

She now joins a small but distinguished list of women who have experienced enviable winning streaks. One example is Amy Nishimura. She was 71 years old when she was reported to have won almost $9 million playing a one-armed bandit at the Freemont Hotel in Las Vegas. Two things make her story unique (apart from the massive win of course). Firstly, she won the money playing the same one-armed bandit she played every time she went to Las Vegas. Secondly, she believes she made the wins because she talked to the machine.

Another example is an anonymous woman who got a massive win on a single spin at a casino in Detroit. When the reels stopped spinning, the combination netted her over $2 million.

The question now is, what’s your biggest ever winning streak? Whatever it is, there is always time to try to beat it, and there is no better place to do that than at 888casino. You can play craps, slots, and a range of other games to see if you can have the same luck as the women described above.

Sign up today to get a welcome bonus that’s worth up to £888. You don’t even need to make a deposit to get the bonus.

Once you register, start playing your favourite 888casino games. Who knows — the next article like this could be describing one of your big wins.