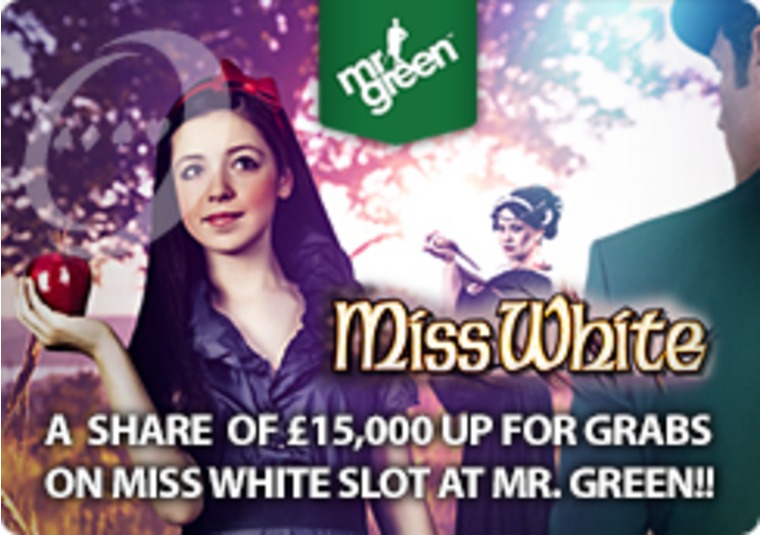 Mr Green has been raining promotions on its players regularly, and the newest one on the block is the Miss White promotion. The prize pool for this promotion is high – £15,000 and this stash will be split among 500 players. The promotion was launched on 23rd April 2015 at 00:00, and is on for 11 days, officially ending at 23:59 on 4th May 2015. This promotion is available for you to play not only on your computer or laptop but also on your mobile device, which means you have a shot at playing this game anytime, anywhere within the timeframe mentioned.

This is how the promotion works: you can enter multiple entries for this promotion, which means you get as many chances as you can work up for a shot at a part of the prize pool. You get an entry into the promotion every time you make a cumulative bet of £10 while playing Miss White. The draw to decide the winners will be on 6th May 2015, and winners will be notified through e-mail or telephone call.

The logic behind the promotion is simple: the more you play, the more entries you get, and thereby the more the chances of you winning. Two things make this promotion an incredible one for players: the total number of cash prizes adding up to the grand total of £15,000 is 500, and the fact that you can enter as many times as you want as long as you are fulfilling the basic terms of the promotions.

Miss White is a 5-reel slot with the 1024-ways-to-win feature that is brought to you by IGT. The game is themed on that incredible story from our childhood, Snow White and the Seven Dwarves. The game is designed in such a way that the winning combinations can be formed from left to right as well as in the three reels at the center. So what are you waiting for? Sign up with Mr. Green and get on the road to a share of £15,000!