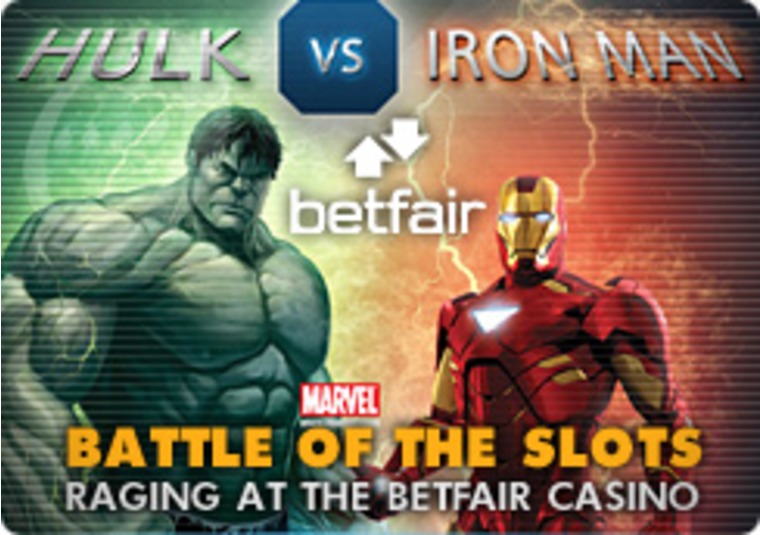 Battle of the Slots Raging at the Betfair Casino

The war is on at the Betfair Casino as two fantastic slots fight it out in the Battle of the Slots!

This month, real money customers at the Betfair Casino may join in the Battle of the Slots. This battle is taking place between the Incredible Hulk and Iron Man. In order to participate in the action, it is first required to select one of the two teams. This is done through the use of the opt in tool and players may choose either the Hulk team or the Iron Man team.

It is required to bet at least £10 during this promo in order to have the chance of receiving any benefit. Having already selected a team, players need to play on the particular slot game during the promotional period. The eligible games are The Incredible Hulk (20 line or 50 line) or Iron Man 2 (25 line or 50 line). This fun event is spinning at the Betfair Casino from 7th January until 20th January 2013.

Eligible players will be in a position to win a portion of the selected team's bonus pot. The team that has the larger collective amount of bets will be considered the winning team. The winning team will share £5,000 in bonus money among all the participants of that team. The team in second place will have £1,000 in bonus money to be shared equally among the members.

It is worth taking a look at the details and terms of theBattleof the Slots promotion that are displayed at the Betfair Casino.

Get ready to fight it out with the Hulk and iron Man in theBattleof the Slots this month at the Betfair Casino!