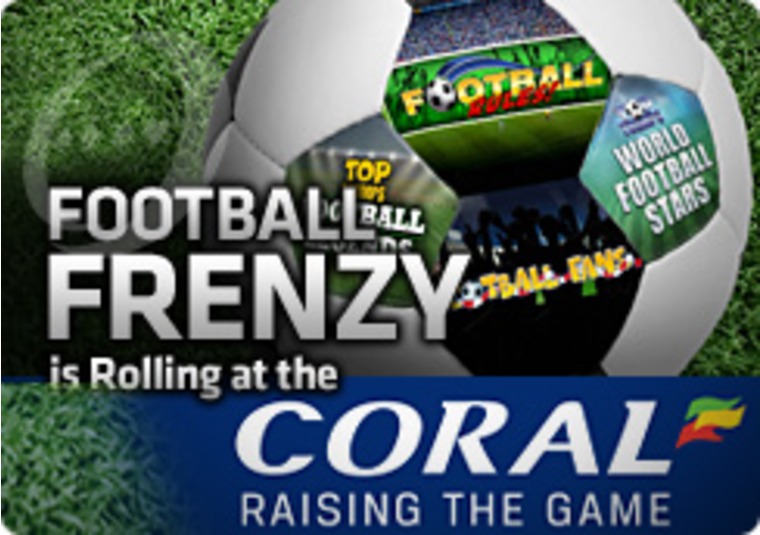 Football Frenzy is Rolling at the Coral Casino

£10 in free bets are up for grabs this week in a Football Frenzy promotion ahead of the start of the Premier League games at the weekend!

The new football season is almost upon us with the first of the Premier League games due to open on Saturday. In celebration of this football action, the Coral Casino is offering its customers the chance to earn £10 in free bets at its Football Frenzy promotion!

If this sounds like a cool idea to you then read on! As a Coral Gaming account holder, all you need to do to participate in this Football Frenzy action is to place a minimum of £10 on the featured game each day of the promotion. The promo is running at the Coral Casino from 12th August until 15th August 2013.

The featured game on the 12th August is the popular game, Top Trumps Football Legends. On 13th August, place your bets at Football Rules! The fun featured pursuit for 14th August is Top Trumps World Football Stars and last but not least is Football Fans on 15th August 2013.

The £10 in free bets at the Football Frenzy promo involves a £5 casino bonus plus £5 to wager on games at the Premier League this weekend!

If you have not yet joined the Coral Casino, take a look as this site offers customers a selection of hot action to keep you entertained and plenty of promos! Sign up today and you may gain a free £10 casino bonus! This special offer does not require making a deposit at the site!

Roll on over to the Coral Casino and get ready for kick off with some great football themed action in an attractive Football Frenzy promotion!