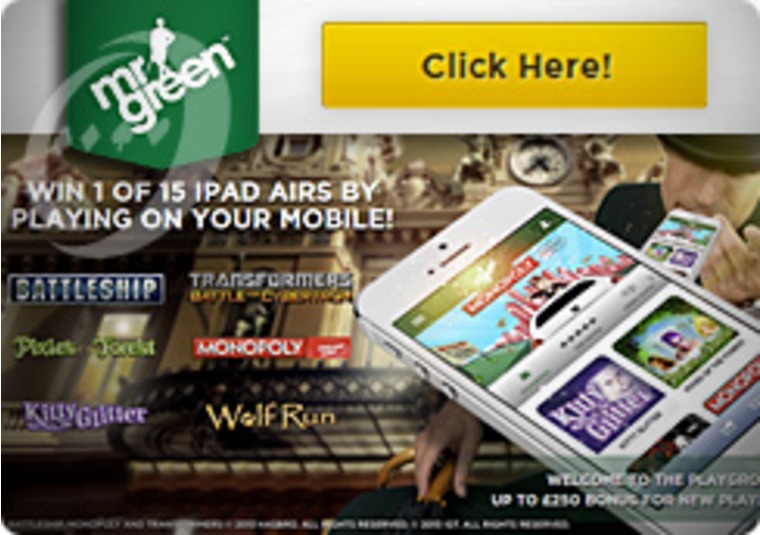 Go Mobile at Mr Green iPads Are Up for Grabs

Together with IGT, Mr Green is offering customers a promo that that boasts prizes of 15 iPad Airs!

In a new promotion offered by Mr Green, you too can have the chance to win a fantastic prize! This is a mobile game promo and is available for real money Mr Green players on selected IGT games. Mr Green likes to pamper his players and in this attractive promotion, 15 iPad Airs are waiting to be won!

In order to take advantage of the opportunity to enter one of the iPad Air prize draws, you need to play at any of the qualifying IGT games during the promotional period. Take a look at the exciting games that you may enjoy! The featured IGT pursuits in this promo are Battleship, Transformers: Battle for Cybertron, Pixies of the forest, Monopoly Dream Life, Kitty Glitter and Wolf Run.

Please bear in mind that this iPad Air Giveaway promotion is available only at the qualifying mobile games. The relevant terms and conditions to the promo may be found at the Mr Green site. Do take the time to check out the information as it is worthwhile finding out in advance details of the requirements.

What are you waiting for? Make your way on over to the Mr Green site, join in the fun and try your hand at the iPad Air Giveaway!