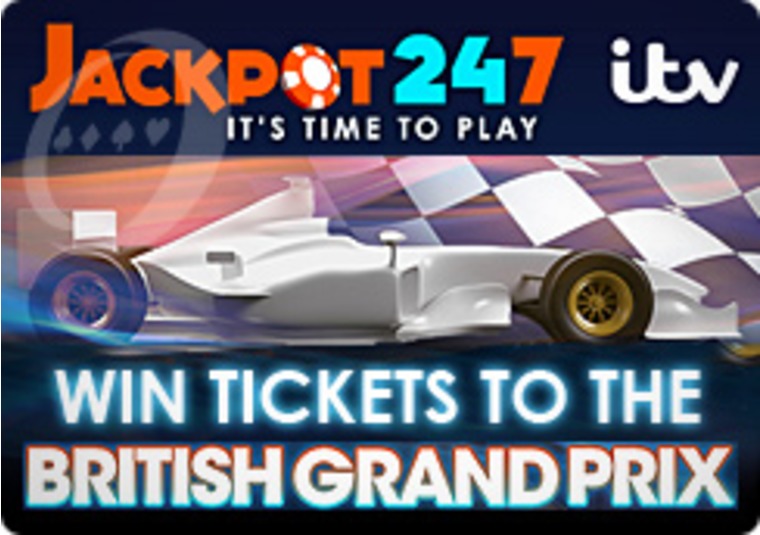 The Jackpot 247 site is offering its customers the chance to play for the fantastic prize of tickets to the British Grand Prix in July 2014!

If this sounds like a great opportunity to you then read on! You may participate in the Great Wager Race that is racing at the Jackpot 247 site and you may have the chance to win entry to the British Grand Prix! This incredible first prize involves weekend tickets to the F1 British Grand Prix at Silverstone and also includes great seats and hospitality.

The contest runs on a leader board basis and winners in this competition will be determined according to wagering at casino games during the promotional period. The Great Wager Race is running from 1st to 21st April 2014. Start placing your bets and you may have the chance to be one of the winners! There are other great prizes waiting to be won in this promotion including Scotch Whiskey, a Virgin Experience Voucher, a £200 Amazon Voucher and a PS4 Bundle.

Please bear in mind that this same contest is running across two other NetPlayTV sites, meaning that the prizes are available to eligible players from any of the 3 participating sites.

In addition to the main 5 prizes, the Great Wager Race also boasts a daily prize draw that offers a cash prize of £100 to 5 lucky gamers. If you want to join in this action and have the chance of winning one of the prize draw rewards, you should make sure that you deposit a minimum of £20 during the promotional period and then play at the casino for real money.

Try your hand at the Great Wager Race at the Jackpot 247 site and you may be lucky enough to win one of the prizes!