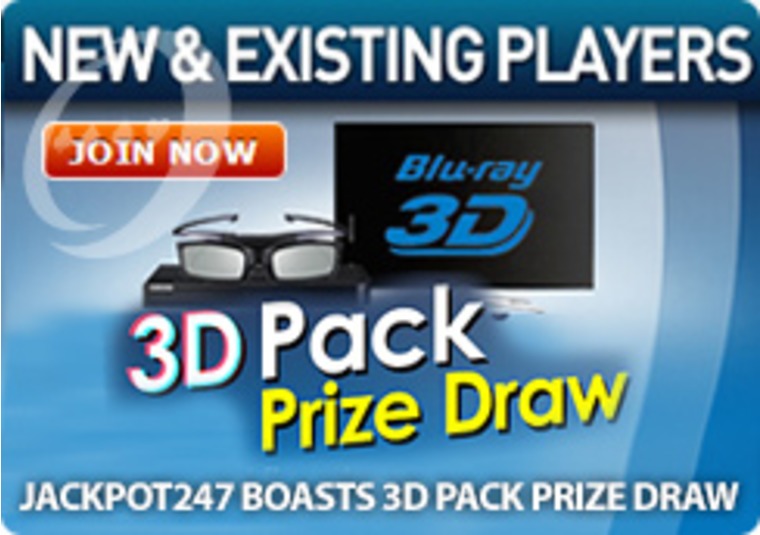 A fantastic 3D Pack is up for grabs in a prize draw in the latest promotion at Jackpot247!

At Jackpot247 you may enjoy great online entertainment and have the chance to participate in a hot prize draw competition! An attractive 3D Pack prize is waiting to be won and the lucky winner will be randomly selected out of eligible entries at the end of the promo.

This 3D Pack Prize Draw is running from 8th August until 26th August and you may gain up to 5 entries during this period of time. What you need to do to get your hands on a prize draw entry is to make sure that you deposit a minimum of £20 and play for real money on your choice of game at Jackpot247 during the promotional period. The prize draw itself is scheduled to take place on 26th August 2014.

As for the prize, take a look at this! This involves a Samsung 40" 3D TV together with 2 pairs of 3D glasses! Also included is a 3D Blue-ray and DVD player. In addition, the lucky prize winner may choose 4 exciting 3D Blu-ray titles. It is recommended to look at all the information regarding the promo at the Jackpot247 site and there you may also find details of which bestselling 3D Blu-ray titles may be selected. If preferred, a cash alternative may be requested and this would be in the amount of £700.

If you are not an existing real money player at Jackpot247, you may sign up today and still join in the promo! As you make your first deposit at the site, you may take advantage of 100% match bonus up to the amount of £200!

Try your luck at the 3D Pack Prize Draw at Jackpot247 and have fun!