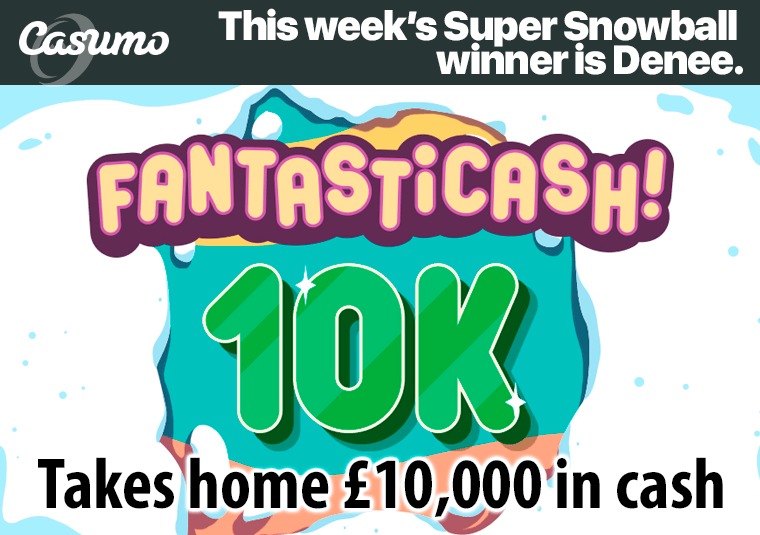 His name is Denee, and he won £10,000 in this fantastic Christmas promotion — and there’s still time for you to win.

Getting £10,000 before Christmas would have been helpful, wouldn’t it? That’s exactly what happened to Denee from Surrey, thanks to Casumo. He entered the casino’s Super Snowball raffle in one of the weeks in December and picked up the top prize. Read more about his story now.

Denee planned to spend some of the money on his four-year-old, and he also planned to save some. He entered the Casumo competition by making a deposit on three different days in the same week. This gave him snowballs, which are like tokens for the prize draws. Check out the other prize draws currently available on the casino’s website.

Denee was lucky enough to win the prize for that particular week. Other winners have also collected cash as well as safari holidays and even a Harley Davidson motorcycle. Find out more about all the prizes that have been won at Casumo.

This promotion is just one of the many that Casumo ran in 2017. All indications are that it plans to continue with the giveaways in 2018. Make sure you’re signed up to receive information on their offers to find out more.

In fact, the competition that Denee won is still running—you can enter it up until the 14 January. That means there are still Casumo grand prizes to be won in the weekly draws — get involved now.

To take part, however, you will need an account. Sign up today to get 20 free spins and up to £300 as a welcome bonus.

Don’t worry if you miss this promotion, though, as Casumo will have plenty more. Get your account now.