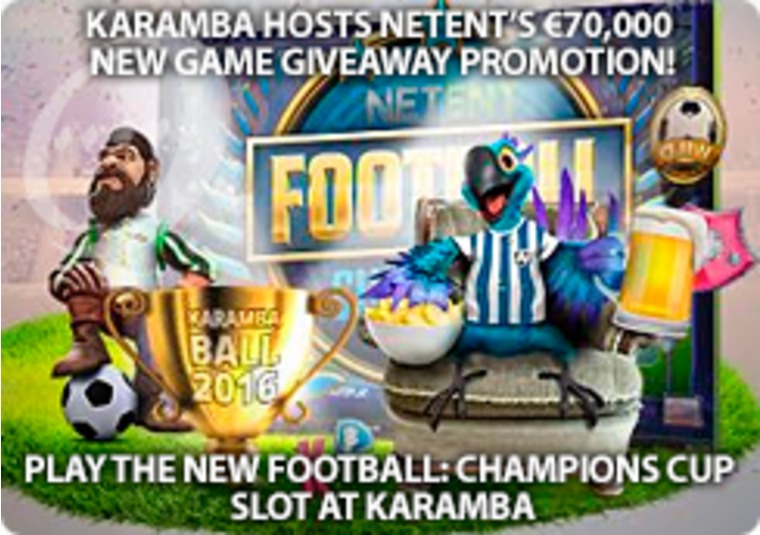 There is £70,000 in prizes to celebrate the release of the new game and the start of the Euro 2016 championship.

Karamba likes to do things big and, let's face, there is going to be nothing bigger than the Euros during June and July. They have a new game being released - called Football: Champions Cup. In addition they are putting the final touches on a two-week promotion which will see 600 winners share in a prize pool worth around £70,000. Visit the website now to find out more.

Karamba is calling the promotion Karamba-Ball 2016. It includes cash prizes, a six night football trip to Europe, and more. Check it out at their website now and you could win the online casino version of the Euro Cup without breaking a sweat.

The promotion is about showcasing one of the newest games to the extensive Karamba suite - Football: Champions Cup. It is a fun and exciting slot made by NetEnt where you can choose to play in the colours of your favourite team. Try it at Karamba today.

The game also has a Penalty Shootout feature where you can win prizes and multipliers that go up to 16 times. There is also a free spins features - give it a go at Karamba now.

To play Football: Champions Cup you will need a Karamba account. Register today to get a welcome bonus worth up to £200 plus 100 free spins. Your account will also give you access to all the other great slots available on Karamba as well as table games and more.

The excitement around Euro 2016 is really starting to build now, but you can increase the intensity levels by playing the new Karamba slot and getting involved in the big promotion. Visit the website today.