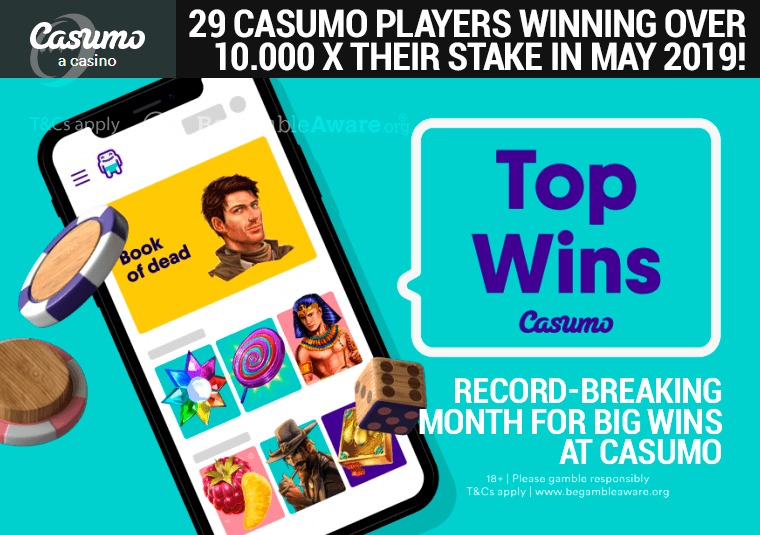 There were two mega jackpot wins in May with 29 players winning more than 10,000 times their stake.

It's always good to hear about big wins at an online casino. Of course, it would be better if you were scooping the big win yourself. It's always comforting to know that big wins can happen. At Casumo, no less than 29 players picked a big win during May 2019. Find out more today.

How do we define big win? In this case, it is a win of more than 10,000 times the stake. That's a big win in anyone's book. For 29 Casumo members, it was life changing. How much can you win today?

The 29 players included two who picked up a mega jackpot. The biggest was a €0.40 spin on the game Mega Fortune Dreams. Have a go at this game now. This generated a win for this player of €238k.

The second biggest win was another spin of €0.40, this time on the game God of Wealth (try it today). This player won almost €100k.

What about the games that generate the most wins? The game that produced the most 2,000-times-stake wins in May was Dead or Alive 2. This was followed by Book of Dead, Dead or Alive, Tombstone, Inferno Star, Primal:Megaways, Jammin' Jars, Legacy of Ra: Megaways, Danger of High Voltage, and Gemix—in that order. Try them all at Casumo today.

You won't be able to try them if you don't have a Casumo account though. Sign up today to get a 100 percent deposit match up bonus worth up to £300.

Who knows – you could be on the next monthly top wins list at Casumo.