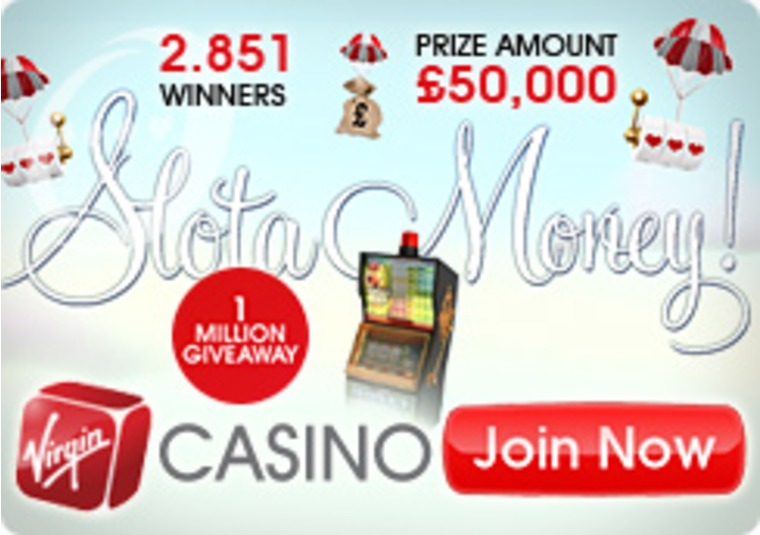 Slota Money at the Virgin Casino

Fantastic prizes are up for grabs in eleven different prize draws at a fun promotion that is about to roll at the Virgin Casino.

A great Slota Money promotion is beginning at the Virgin Casino on 29th October and will be running until 9th December 2012. This promo involves no less that eleven separate prize draws each with its own prizes and different qualifying game.

The first of these prize draws will be taking place on 2nd November following the qualifying period from 29th October to 1st November. The total prize amount is a cool £50,000 that will be divided between 2,851 winners. What you need to do in order to be a part of the action is to spend a minimum of £10 on the participating slot game during the specified dates. Each £10 spent will earn you one entry for the corresponding prize draw.

This promotion boasts 11 separate prize draws and each draw has its own dates, game and prize amounts. The exciting slot games involved in this Slota Money promo are as follows: Zodiac Super Nova, Fireworkz Blitz, Lucky Ladies 88, Castle Cashalot, Jungle Madness, George and the Dragon, Fruity Burst, Dynamite Digger, Bouncy Balls, Clover Rollover and Big Top Tombola. Full details of the dates and the related games and prize amounts may be found at the Virgin Casino site.

If you are not yet a real money account holder at the Virgin Casino, then you may still have plenty to gain as a 100% deposit bonus awaits new players! After making a first time deposit at this site you may take advantage of a 100% match bonus up to the amount of £100.

Get ready to spin at the Virgin Casino this autumn and you could win a slota money!