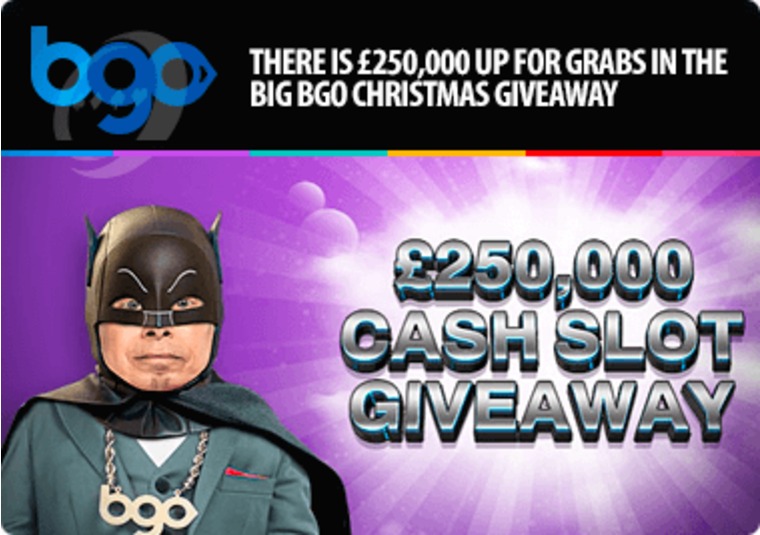 There is £250,000 up for grabs in the big bgo Christmas giveaway

Play an eligible game to get tickets to the three prize draws over the Christmas period.

At bgo they like doing things big. With this promotion you won’t be disappointed as the prize fund is a whopping £250,000 over three prize draws. All you have to do to enter is play an eligible game - start collecting your tickets today.

The eligible slots include three Age of the Gods games - Prince of Olympus, Fate Sisters, and Goddess of Wisdom. You can also choose from six Batman-themed games - Batman and Catwoman Cash, Batman and Batgirl, Batman and Joker, Batman and Mr Freeze, Batman and Riddler Riches, and Batman and The Penguin Prize. Try them at bgo.

Each time you wager £10 on one of these games between now and 1 January 2017, you’ll get a ticket for the bgo prize draws. Start collecting them now.

The prizes in each draw range from £10 to £5,000, and there will be over 15,000 winning tickets over the course of the promotion. That is loads of chances to win, so get your entries in at bgo today.

If you don't have a bgo account yet, sign up for one today to get free spins on Starburst and a welcome bonus worth up to £1,500.

Then start playing the eligible games and collecting your tickets to the big bgo Christmas prize draws.