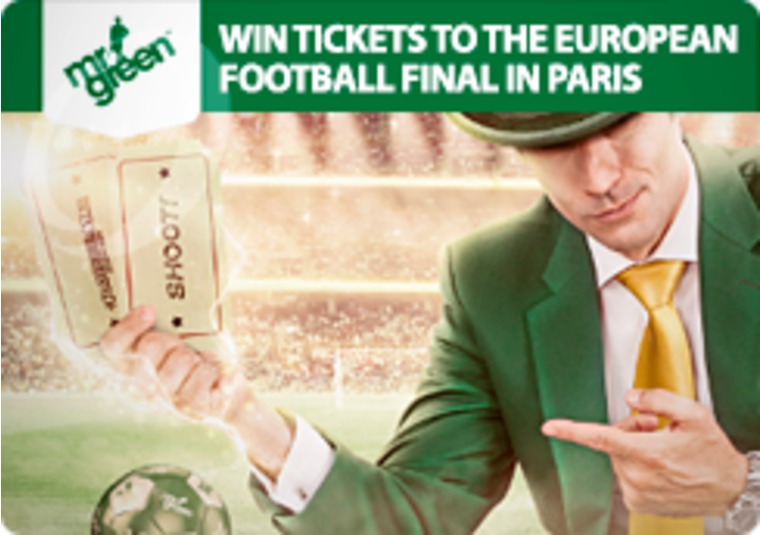 Enter this prize draw to win a pair of tickets to the hottest event in Europe this summer: the final of the Euros.

Would you like to go to the final of Euro 2016? Who wouldn’t! That is exactly what the prize is in this fantastic competition at Mr Green. Get your entries in today.

It is a prize draw, so you have to collect tickets. You can collect as many tickets as you like. Obviously, the more tickets you have, the more chances that one of yours will be picked in the draw. Start collecting them now at Mr Green.

They are easy to collect—you will get one ticket for every £50 that you wager on one of Mr Green's two football-themed slots. They are called Shoot! and Football Star. Start playing them today to get your tickets.

You have until 28 June to get as many tickets as you can. This is probably the best prize draw you will find at any online casino at the moment, so make sure your entries are in. Go to Mr Green now.

The prize includes tickets for two people to watch the Euro 2016 final. You will also get two nights’ accommodation at a four-star Paris hotel plus £500 in spending money. This is what footballing dreams are made of — visit Mr Green to start collecting your tickets, and it could be you.

The competition is only available to Mr Green account holders though. If you don’t have one and you want to take part, you will need to register. Click here to get a welcome bonus where your first deposit will be doubled, up to £100.

Players are playing Shoot! and Football Star right now at Mr Green, and they are collecting tickets to the prize draw. Start collecting yours too.