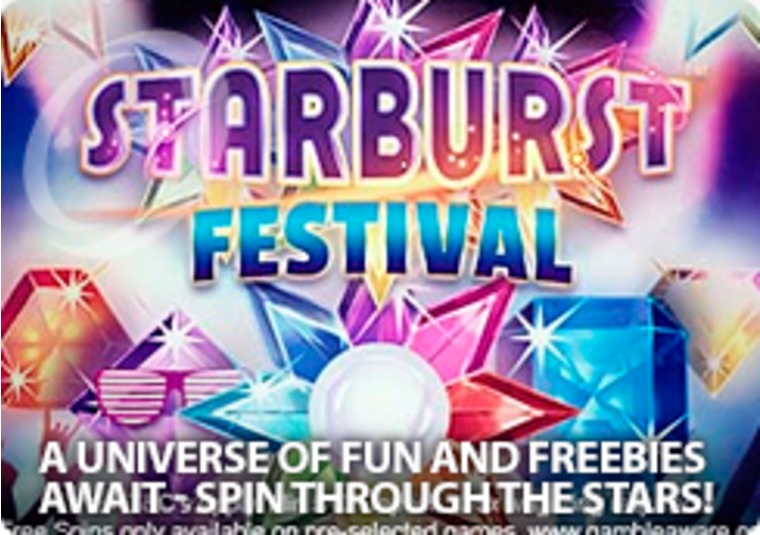 It is the Starburst Festival at Leo Vegas and it’s huge, with loads of big prizes and bonuses to give away.

This is one of the biggest promotions available in the UK right now with loads of chances to win massive casino bonuses or fantastic prizes. Start playing Starburst today at Leo Vegas to take part.

The first part of the promotion is a random prize draw. You’ll get one ticket every time you deposit and play £10 on Starburst. You can claim as many tickets as you like until 4 April. The lucky winner of the draw will get £25,000. The next 50 runners up will get £1,000, and a further 250 players will get £100. Start playing Starburst at Leo Vegas today.

The second part of the promotion is leader boards. As well as your ticket to the prize draw, every £10 played on Starburst at Leo Vegas earns you a point on the leader board, so start collecting.

There are two remaining leader boards in March - one ends on the 17th, and one on the 24th. The runners up prizes include cash and Apple gadgets. The first prize in each draw is a holiday - a weekend away to watch the Eurovision Song Contest, or a luxurious VIP weekend away. Visit Leo Vegas now to start collecting your points.

The final part is a daily spins offer. Leo Vegas is giving everyone who takes part in the promotion three free spins a day to use on Starburst - get yours now.

If you don't have a Leo Vegas account yet register for one now and you’ll have the option to collect a £1,500 bonus plus 250 free spins.