What is Blackjack in a Nutshell?

Blackjack is the name given to the card game that requires players to aim for a hand of 21 or closest. There are many variants of blackjack today, all of them with similar rules. However, it is up to the player to ensure that he or she understands the particular rules of each variant before attempting to play. For the sake of uniformity, we will examine the rules of the game known as classic blackjack.

What is the Object of Blackjack?

Blackjack, played against the dealer, requires that the player reach a total of 21 with the cards dealt to him or her during the course of the game, without exceeding that number. Whoever manages to reach nearest to 21 without going ‘bust’ is declared the winner.

What are the Card Values in Blackjack?

What is the Blackjack Table?

A blackjack table is a customized table on which the game is played against the dealer. An average of six players can play at once around this table, although they do not influence one another and the cards they are dealt are of no consequence to the other players. At casinos, blackjack tables differ from one another according to the number of decks used and the minimum/maximum wagering requirements. 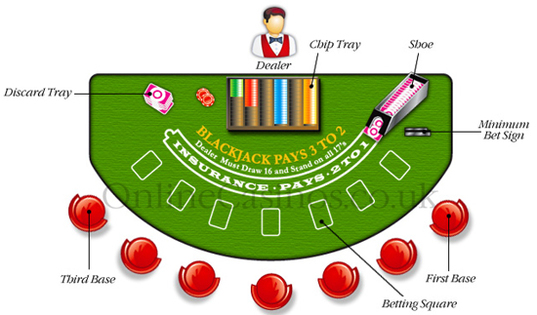 What is the Game Process in Blackjack?

What are the Playing Options Available at this Stage of Blackjack?

What is the Role of the Dealer in Blackjack?

The dealer is bound by the rules of the house and thus needs to act according to the blackjack variant being played. A player’s game strategy should take into account when a dealer is obliged to hit or stand as this can make a significant difference to his own success. In classic blackjack, it is generally accepted that a dealer needs to draw a new card (‘hit’) if his own cards don’t total more than 16, and ‘stand’ if his cards total 17 or more.

How does One Win in Blackjack?