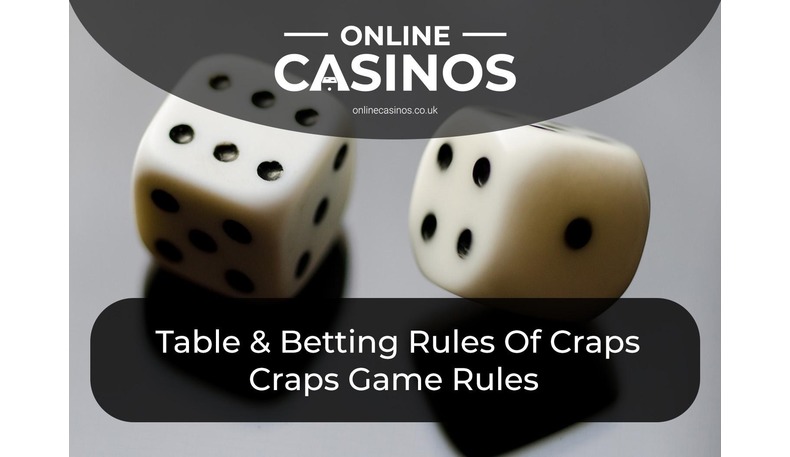 Craps is a historic dice game that was created as a simplified version of the English game Hazard – referenced in Geoffrey Chaucer's Canterbury Tales, which was written between 1387 and 1400.

Today it’s is played in casinos across the globe, but some people think the rules of craps are too complicated for the game to be enjoyable – we’re here to help make sure that you have fun.

From snake eyes to the point phase, we’ve covered all the crucial rules and terminology for craps. All you need to do is read them and then head over to your favourite casino to have a game!

What Are The Basics Of Craps?

Played with just two dice around a specially designed table, craps could easily be described as one of the simplest games of chance around.

What Is The Craps Table?

The craps table is unique in design and is where players traditionally place their bets before the game begins – below you can see what the craps table looks like and where bets are placed:

At a land-based casino, two dealers at either side of the table take bets from players. In addition, there are at least two other attendants around the craps table.

The table is divided into three sections:

Each of the sides contains the following areas:

How Do You Play Craps?

In bank craps, the player bets against the dealer by placing a casino check (rather than a cash wager) on the table in rounds of betting. The betting player is known as the ‘shooter’ and they bet the table minimum (at the least) on the Don’t Pass Line or the Pass Line.

The shooter selects two dice and throws them – the dice must hit the walls located at the opposite side of the craps table and the shooter is only allowed to handle the dice with one hand. This action begins the first round of betting, with players taking it in turns to roll the dice and the betting action moving clockwise around the table.

There are two phases to each round of betting in craps: Come Out and Point.

What Happens During The Come Out Phase In Craps?

What Happens During The Point Phase In Craps?

Once the shooter has rolled a Point, the dealer moves an On button to that number on the craps table.

When Are Bets Paid Out In Craps?

The dealer has a period between dice rolls where they determine who should be paid out winnings, along with collecting the loses from losing bets.

What Are The Dice Rolls Called In Craps?

As there are two dice rolled in craps, your dice roll will give a result of between 2-12, and each of the outcomes has its own name.

Two is known as ‘snake eyes’ because it looks like a pair of beady eyes. Two is also known as ‘two craps two’.

Alongside its main name of ‘three craps three’, some of the other names for rolling a three are ‘three’, ‘ace deuce’ and ‘come away single’.

Known as the ‘ballerina’ because it’s two-two (a tutu), rolling a four is also called ‘Little Joe from Kokomo’, ‘Little Joe’, or ‘Little Joe on the front row’.

Perhaps known as ‘fever’ because of the verbal similarities between that and fiver, scoring a five is also known as ‘no field five’ and ‘Little Phoebe’.

6: Jimmie Hicks from the sticks

Hit a six and it’ll give you a ‘Jimmie Hicks from the stick’s or ‘Jimmie Hicks’. If you win with a six your roll is termed a ‘666 winner 6’.

Craps tables traditionally featured a large red seven, meaning that hitting a seven is known as ‘big red ‘– other names include ‘up pops the Devil’ and ‘six ace’.

American outlaw Jessie James was shot dead with a .45 calibre pistol and if you roll a nine by hitting 4 and 5 your score is called a ‘Jessie James’. Other terms for a nine roll are ‘centerfield nine’, ‘Old Mike’, ‘Nina at the Marina’, ‘Nina from Pasadena’, ‘niner from Carolina’, and ‘railroad nine’.

Called a ‘yo-leven’ by many casinos and gamblers (to avoid it being mistaken for seven), scoring an eleven is also known as ‘yo’ or ‘six five, no jive’.

Why is rolling a twelve known as ‘boxcars’? Because the spots look like drawings of railroad boxcars. Other names for twelve include ‘midnight’ and ‘double-action field traction’.

What Are The Most Popular Bets In Craps?

Although craps is a simple game to understand, there are quite a number of various betting options that players should familiarise themselves with before beginning to play. Some of the most common betting variations available include:

Players can make a prediction on what the next roll of dice will total at any time during the shooter’s game. If the roll of the dice totals seven or eleven, the Come Bet wins; but if 2, 3 or 12 are thrown, the Come Bet loses.

What Are The Odds For Winning At Craps?

Your odds for winning at craps depend on the type of bet you place. Below you’ll find the odds for each bet you can place in craps.

Many gamblers are put off playing craps because the game has a lot of rules. However, once you’ve mastered the basics you can have a lot of fun with this dice game. We’ve explained the rules to you in this article, so learn them well and then head over to your favourite land or online casino to play craps!

How Do You Play Street Craps?

If you play craps in either a land or offline casino you’ll be playing bank craps, but that’s not the only version of this dice game. Street craps (also known as street dice) is a simplified version of craps. The video below explains how to play street craps:

What Does It Mean When You Roll A Snake Eyes In Craps?

Craps uses two dice and that means when you roll, you can get a score ranging from 2-12. If you roll a snake eyes when playing craps it means that you have scored a 1 and a 1.

Why Is Rolling Eleven In Craps Called A Yo?

Rolling an eleven in craps has many names, with ‘yo’ and ‘yo-leven’ being two of the most commonly used. People began calling a score of eleven yo-leven so as to avoid it being mistaken for a seven and over time this was shortened to yo.

How do you win at craps at casino sites?

There are two top tips that will help your chances of winning online craps games.

Using these tips won’t guarantee you victory, but they will give you a better chance of having a winning craps session.

What is the best bet to make in craps?

The best bets you can make in craps games are come/don't come and pass/don't pass. If you use just these bets then it should keep the use advantage to around 1.36%.

What are the payouts in online craps games?

There are 22 different types of bet you can make in craps games and the payouts vary wildly between them.

Is there any skill in craps games?

Craps games are a combination of using a mathematical approach to picking bets with favourable odds and hoping for the luck of the dice landing in the way you want them to.

Can craps be beaten?

The lowest house edge you can get in craps is 1.36% and the game is based on the luck of the dice. This means the odds of you beating the game are always stacked against you, even if they’re only against you by a small margin.

What does C and E mean in craps games?

C and E in craps stand for Any Craps and Eleven. It’s a proposition bet on a single roll that adds Eleven to the Any Craps.

Whats the most common number rolled in craps games?

Seven is the number most commonly rolled in craps games. The odds are that you’ll see a seven 1/6 times the dice is rolled. This is because the seven has the greatest number of combinations between the two dice used in craps games.